The 2016 Parliamentary Election Case Digest. A focus on Decisions of the Court of Appeal of Uganda
Uganda
$0
2021
View more.. 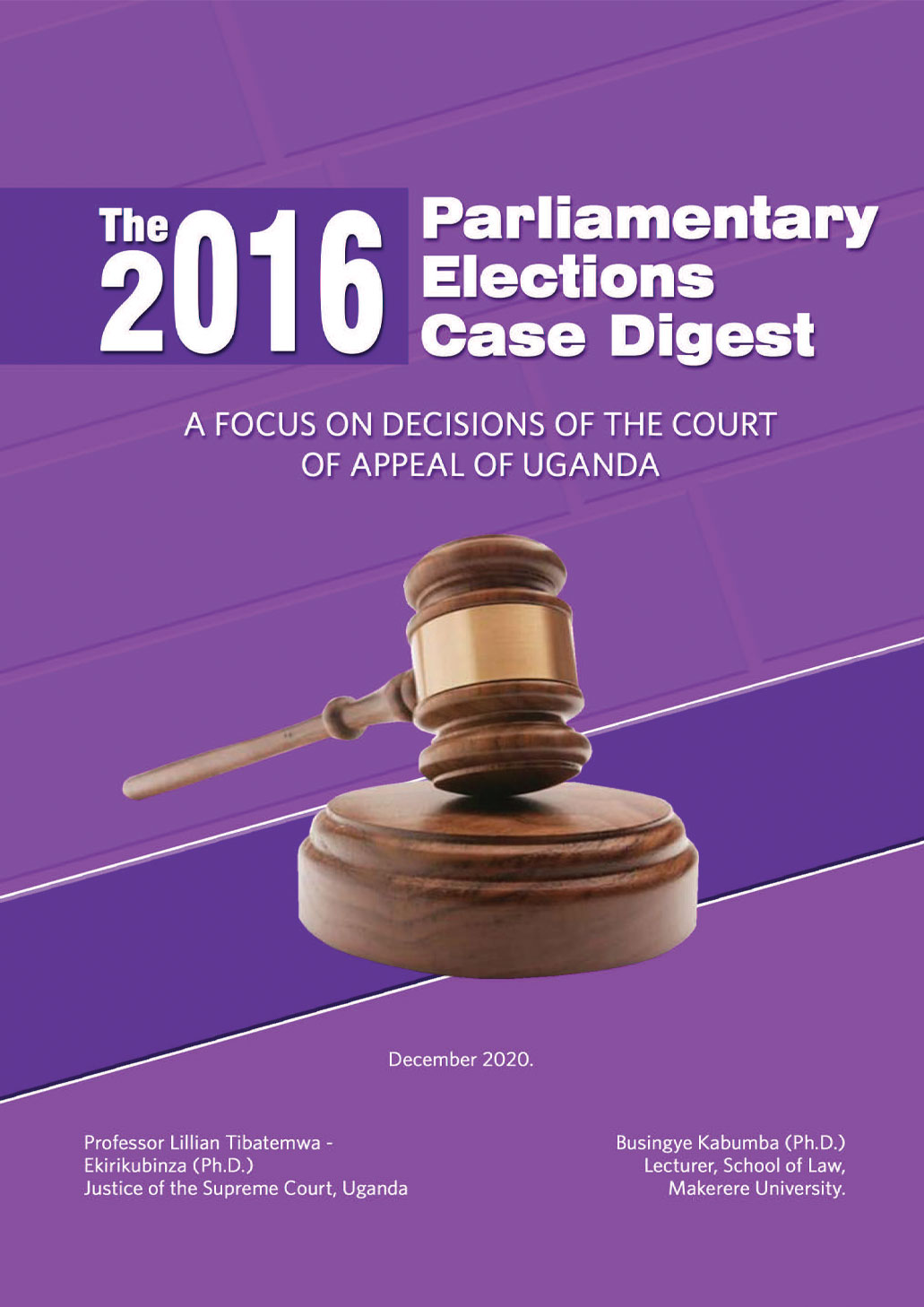 The 2016 Parliamentary Election Case Digest. A focus on Decisions of the Court of Appeal of Uganda

The 2016 Parliamentary Election Case Digest. A focus on Decisions of the Court of Appeal of Uganda 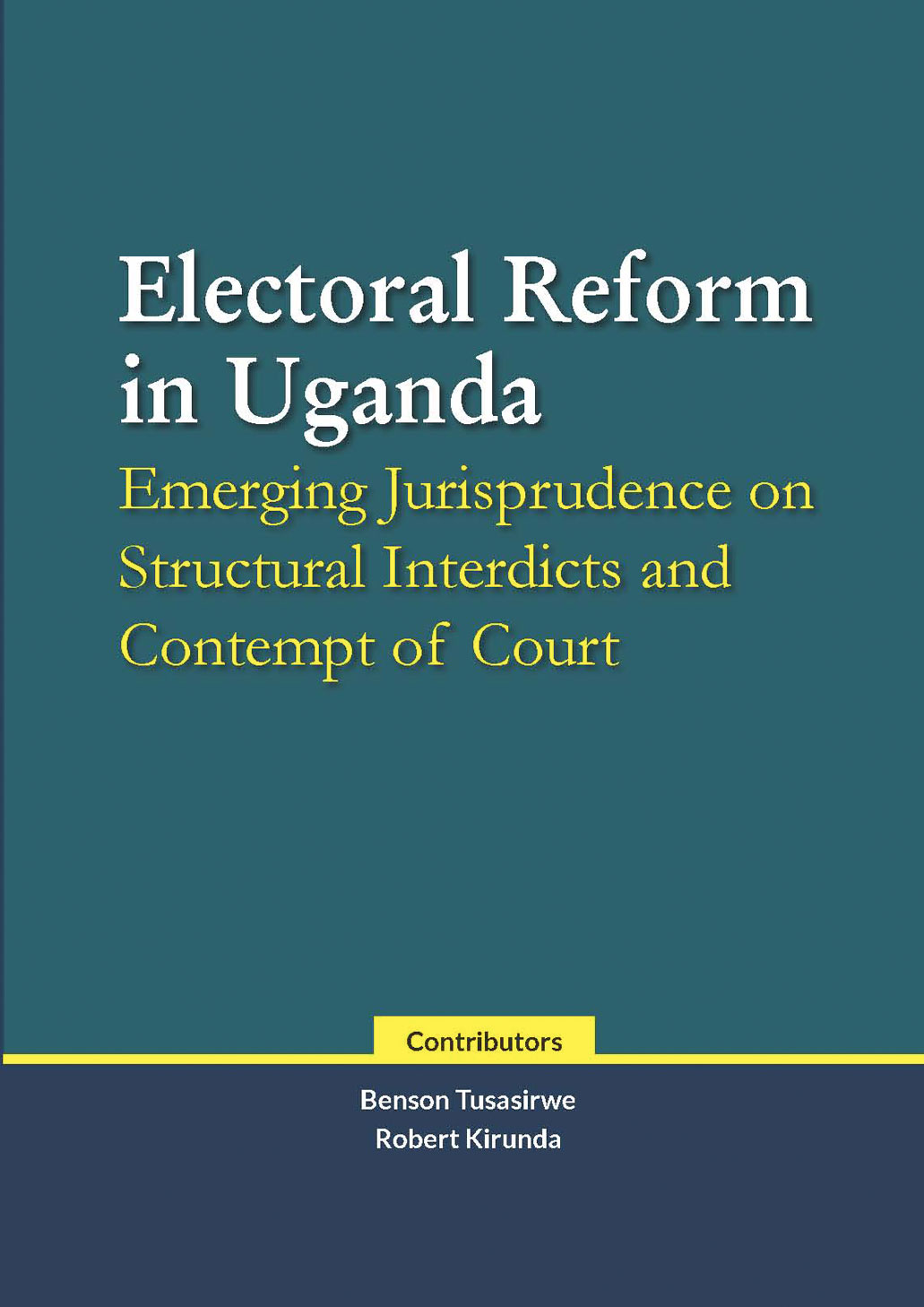 Electoral Reform in Uganda. Emerging Jurisprudence on Structural Interdicts and Contempt of Court

Electoral Reform in Uganda. Emerging Jurisprudence on Structural Interdicts and Contempt of Court. 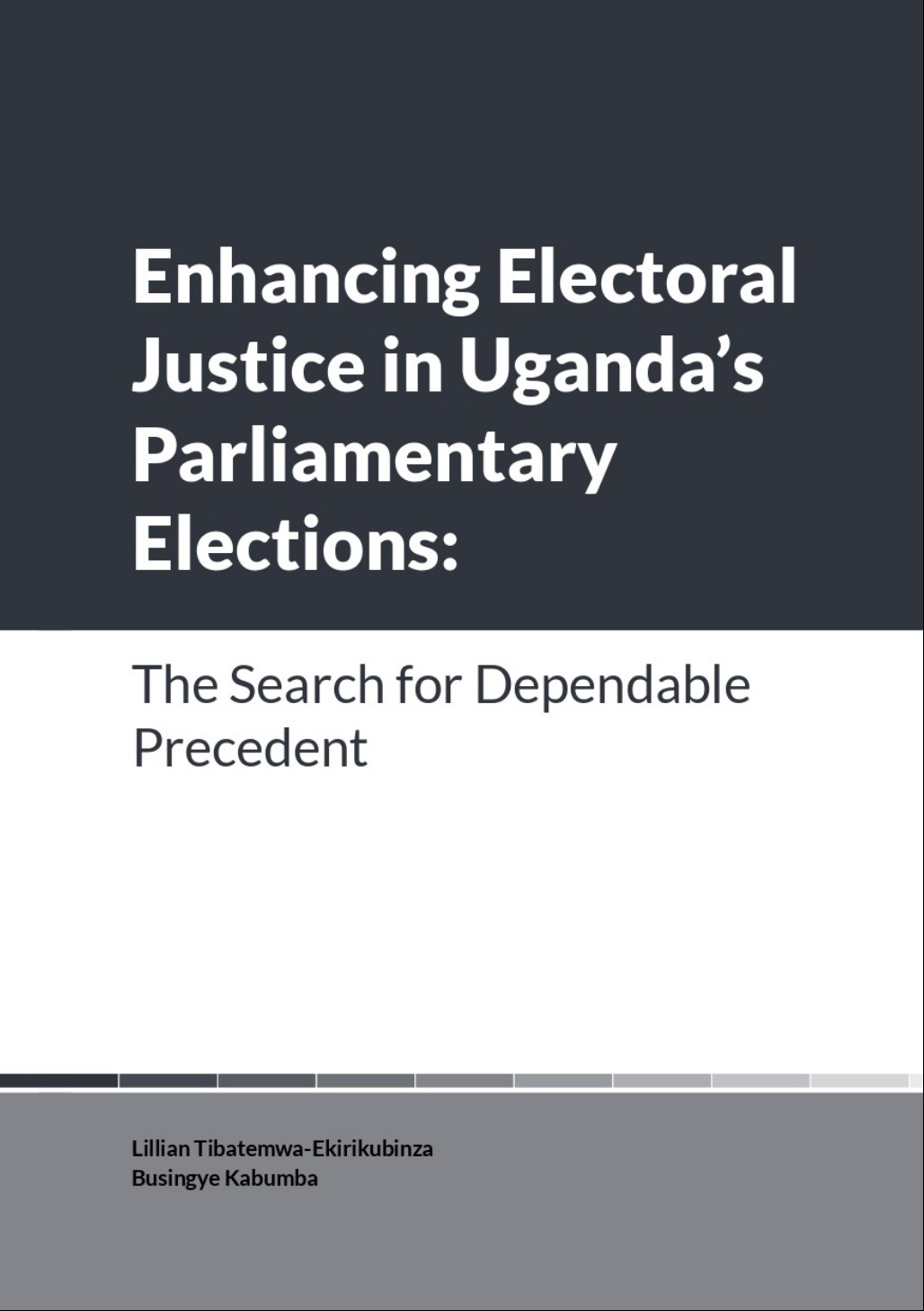 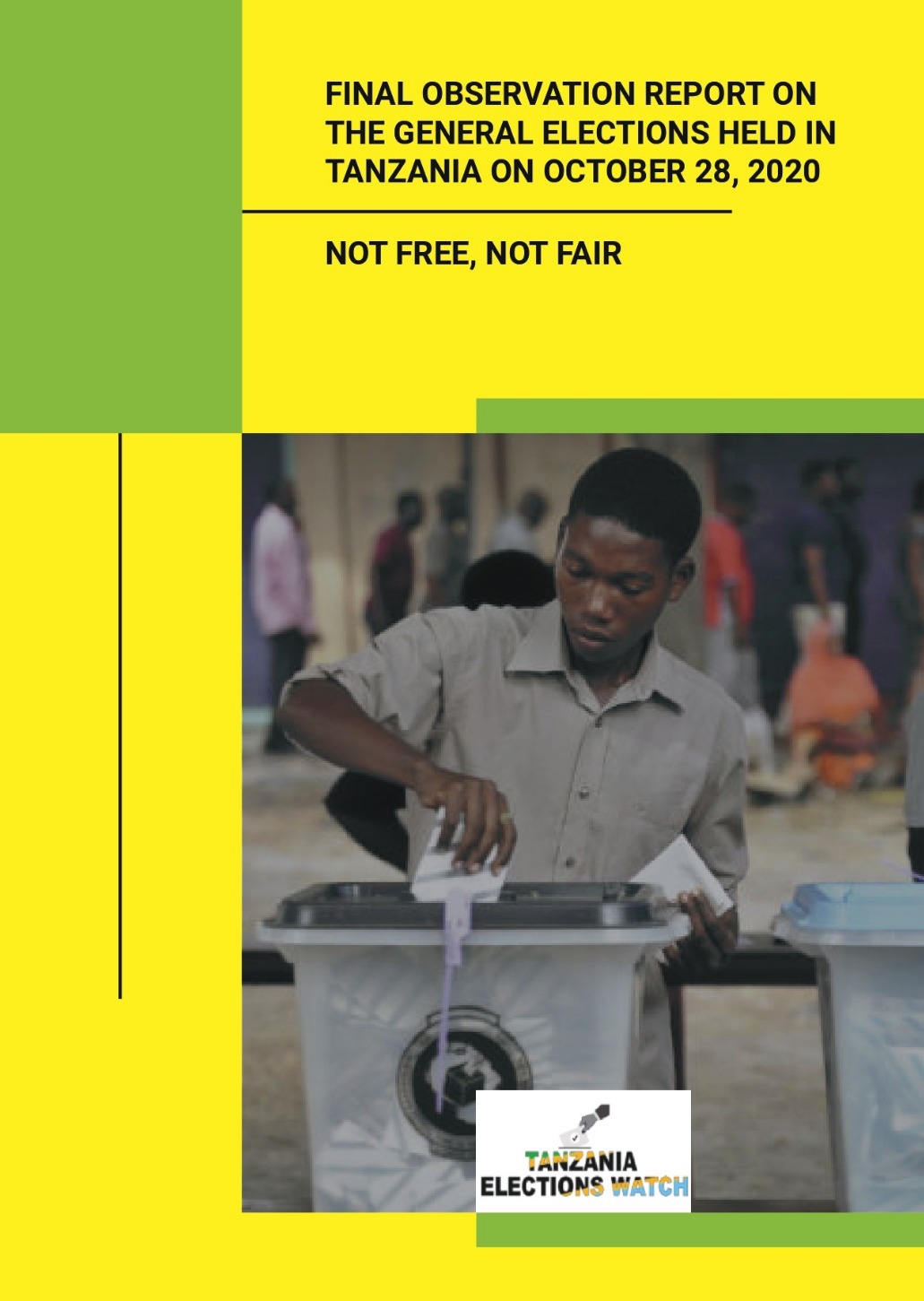 Final Observation Report On The General Elections Held in Tanzania On October 28, 2020

Tanzania identifies itself as a democracy. Its tradition of competitive political contest and inclusion, built since the restoration of multipartyism 25 years ago, has recently suffered severe setbacks because of shrinking civic space and low tolerance for political plurality.

Going into the October 28, 2020 General Election, Tanzania had effectively shut out independent election observation and monitoring by denying accreditation to civil society organisations, deregistering non-governmental organisations, and freezing the bank accounts of large civil society coalitions. The exclusion of observers from the electoral process foreshadowed the country’s approaching democratic decline. It is against this background that civil society organisations from the eastern Africa region established the Tanzania Elections Watch (TEW) initiative.

The initiative, organised and coordinated by Kituo cha Katiba: Eastern Africa Centre for Constitutional Development (KcK) and the Kenya Human Rights Commission (KHRC), sought to plug the gaps evident in the exclusion of domestic observers from the electoral process and the inability of international observers to access the country due to the Covid-19 pandemic, as well as provide oversight for the elections.

Peace and Unity in the Isles - Prospects of a Government of National Unity in Zanzibar
Zanzibar
$0
2019
View more.. 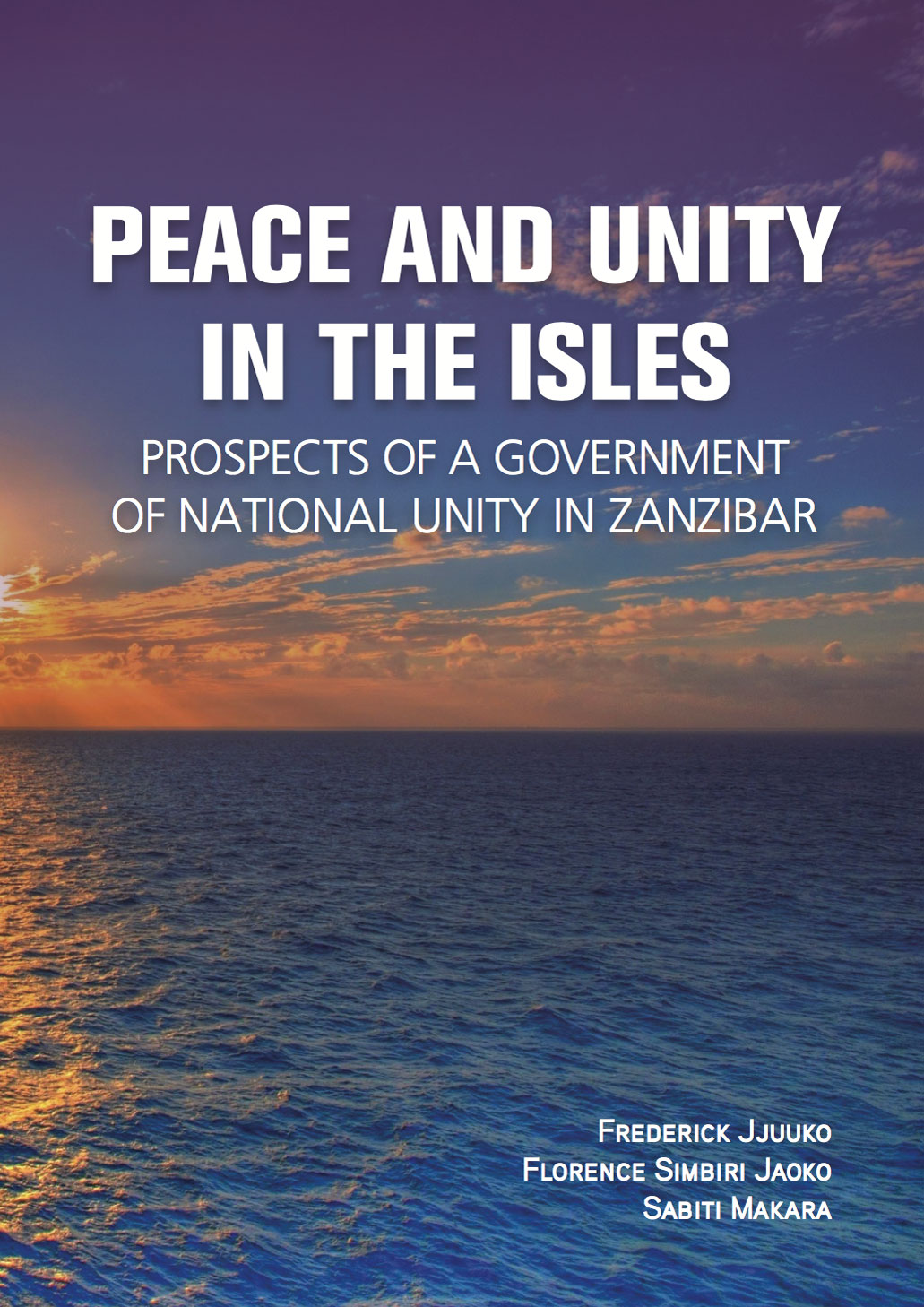 Kituo cha Katiba: The Eastern Africa Centre for Constitutional Development (KcK) sent a fact finding mission to Zanzibar out of concern about the post-2015/16 election political developments in the country. The major goal of the mission was to provide an avenue for Zanzibaris to express their views and exchange ideas about their country’s constitutional future. The specific objectives were to: Capture, document and assess the voices of Zanzibar is on outstanding constitutional issues following the 2015 elections; the implications for the future; and recommendations for constitutional reform and the way forward, Provide a neutral forum for popular assessment of the Government of National Unity (GNU) – its achievements and challenges in the light of Zanzibar’s constitutional and political development, and Identify key strategies to move Zanzibar’s constitutional agenda forward.

A People’s Dialogue Political Settlements in Uganda and the Quest for a National Conference
Uganda
$0
2018
View more.. 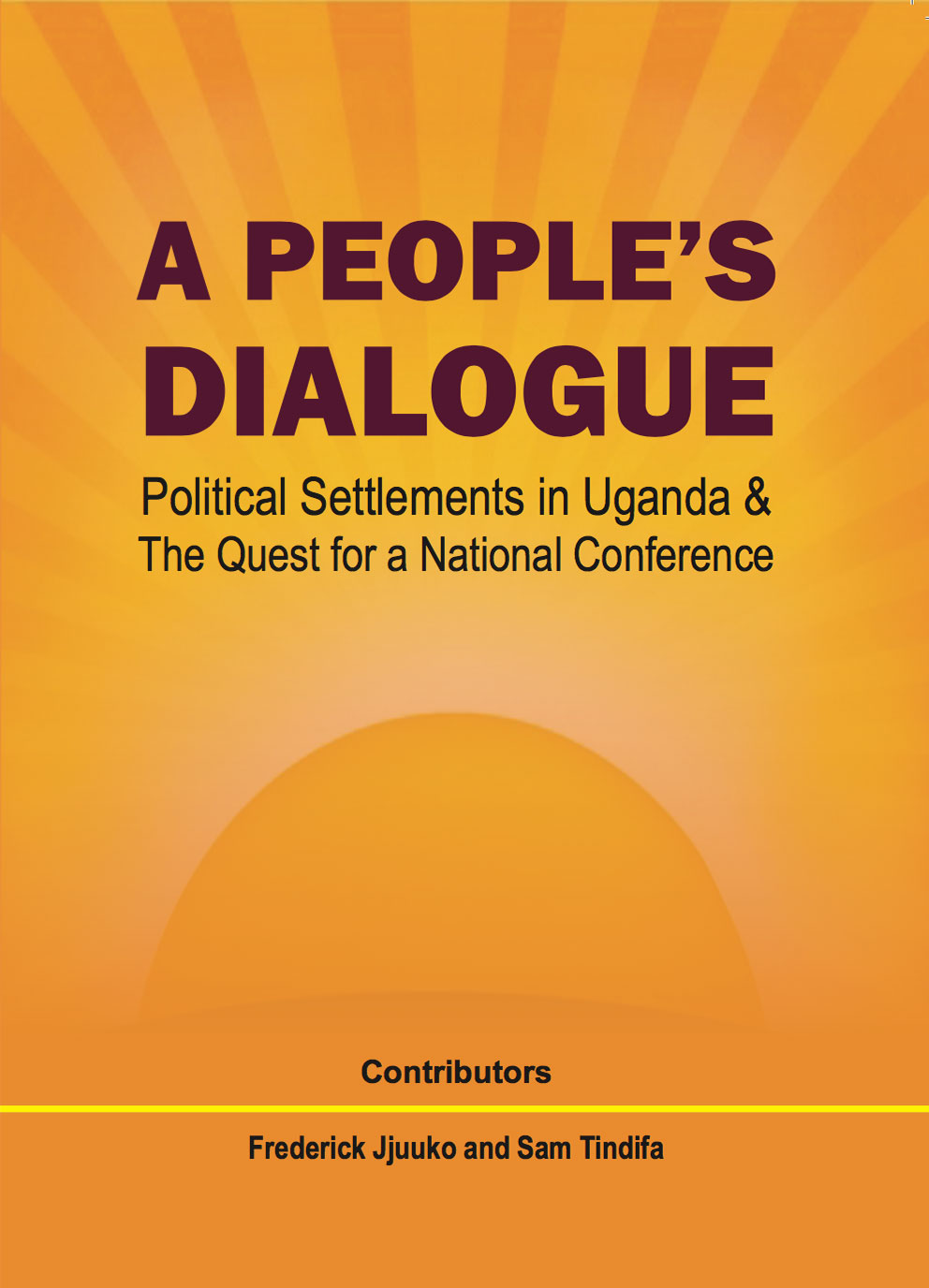 A People’s Dialogue: Political Settlements in Uganda & the Quest for a National Conference is the result of a study on political settlements in Uganda and the future of governance. The framing of these settlements was frequently marked by manipulation and fraud, and their endorsement done under duress. However, after Uganda attained political independence, itself the culmination of a settlement at Lancaster House, a number of settlements were negotiated and sealed, involving a variety of parties, to respond to specific political challenges and emergencies.

Post-independence Uganda has never experienced a peaceful transfer of power, with serious social and political repercussions. This state of affairs created the need to analyse, in detail, various settlements, starting in 1890 and ending in 2007.

Since the various settlements seem not to have led to sustainable democratic governance in Uganda, it is felt that a meaningful political settlement involving a national dialogue remains the only meaningful option. This study recommends a settlement arrived at with the involvement of citizen groups and using the bottom-up approach.

The study is enriched with an appendix comprising all the settlements that it draws upon for those readers who might wish to delve into them. Also appended to it is an important document on the Juba Peace Process from Uganda Women’s Coalition for Peace. 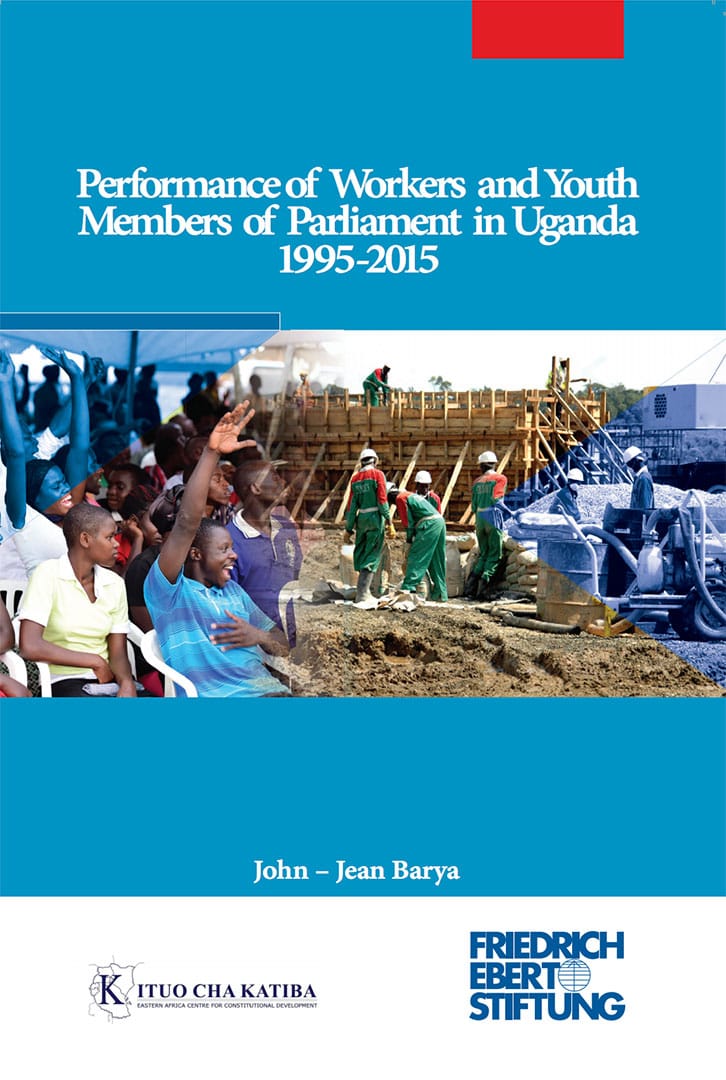 Copies are sold at KcK offices (Plot 7 Estate Link Road, Bukoto, off Lugogo By-Pass.). For retail and bulk purchases, please get in-touch with us. 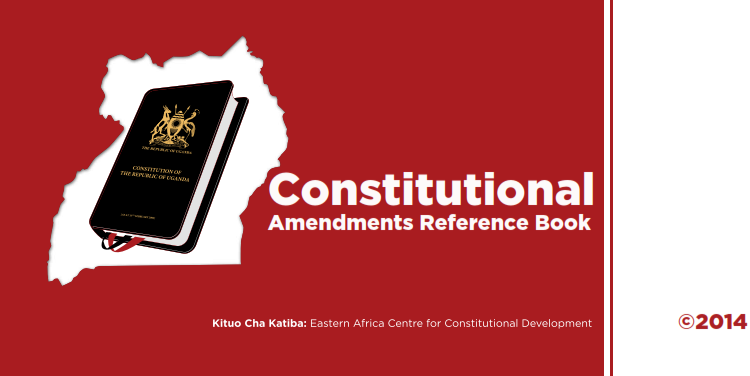 Kituo Cha Katiba also known as the Eastern African Centre for Constitutional Development (KcK) is a regional nongovernmental organisation (NGO)
based in Kampala,Uganda. It was established in1997 as a think tank to promote constitution making and democratic governance. KcK provides critical and up-to-date information to East Africans on constitutionalism, good governance and democratic development.

KcK has contributed to constitutional making processes in Uganda, Kenya, Tanzania and South Sudan. In 2013,KcK constituted a team of experts in constitution making from Uganda and Kenya to provide critical input to the Draft Constitution of Tanzania 2013. Several of the team’s recommendations found their way into the Second Draft that was debated by the Constituent Assembly (CA) and  Final Draft Constitution which is to be the subject of a referendum.. In the same year - 2013, KcK commissioned a team of experts drawn from Uganda and Kenya to examine the process and progress of constitution making in South Sudan and provide critical input to it based on best practices and lessons from East Africa. The project has been partly implemented because of the civil war in the country and is to be extended. KcK conducted a fact-finding mission in Kenya in September 2001 to initiate dialogue among all stakeholders involved in the constitutional review process in the country and to share experiences with the Ghai Commission in order to positively take the constitutional reform process forward.  In 2007, KcK developed an alternative draft of a new constitution for Kenya, building on the Bomas and Wako drafts. 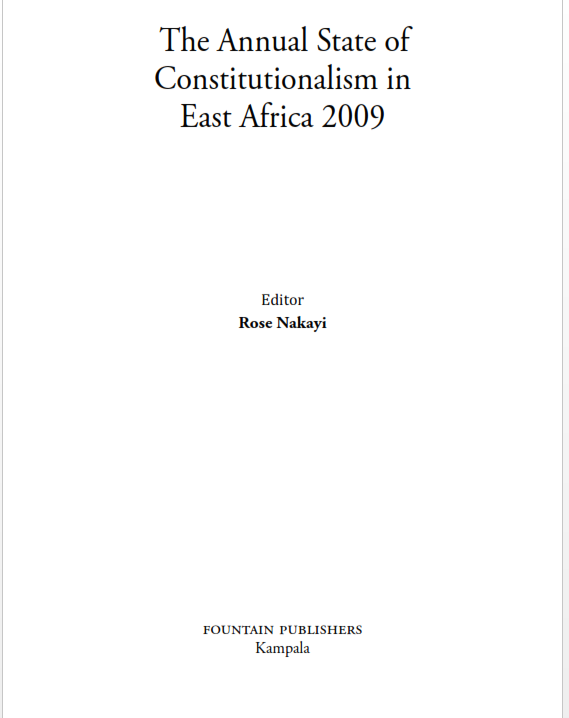 The publication of this series on the annual state of constitutionalism (ASC) is timely, since it is now ten years after the revival of the East African Community (EAC). This has given the authors of the papers in this volume an opportunity to take stock of the achievements and huddles towards regional integration and the state of constitutionalism at both the national and regional level, and how the national issues of constitutionalism feed into or shape
the regional matters and vice- versa.The papers further discuss the diverse governance trends in East Africa as they unveiled in 2009 through the lens of constitutionalism.
Corruption and other aspects, such as the genocide ideology law that has been criticised as draconian in Rwanda, the unresolved Buganda Question and its implications on the stability of Uganda, are all brought to the fore. They further reveal that although the East African countries have made strides in the right direction to make human rights a reality in the lives of their people, there are still so many glaring loopholes in the area and more efforts are required to improve the situation. Economic, social and cultural rights (ESCRs) are still relegated to second position as revealed in the Tanzania paper. Also, 2009 was bleak in regard to human rights for some minority groups. 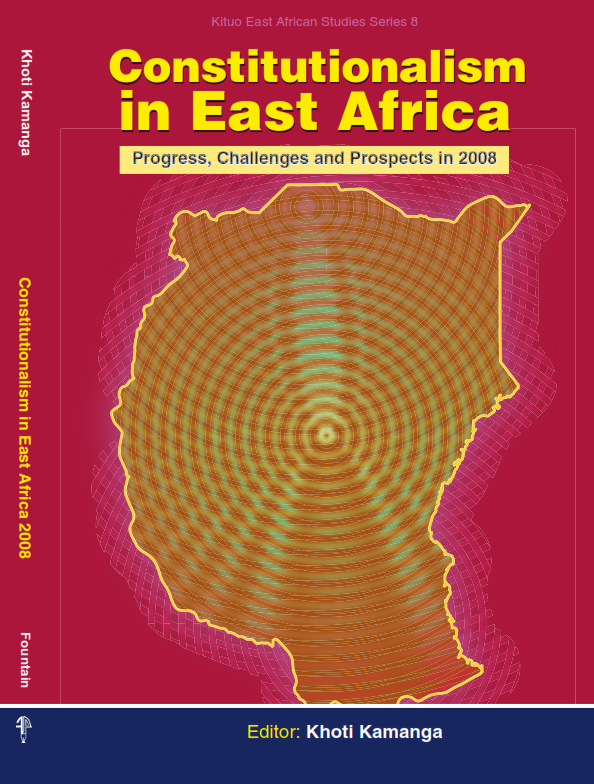 Once again, Kituo cha Katiba (KCK) brings its esteemed readers  insights on a wide range of developments in the East African region, of relevance to constitutionalism and human rights, and which in the opinion of this particular series’ contributors, left the greatest impression.
In The State of Constitutional Development in the East African Community Med Kaggwa starts by recapturing, in broad strokes the highlights in the Community’s journey as it headed forits present destination, a Common Market. He informs us that in their decision of April 2008, the Summit gave its approval for negotiations leading to the adoption of a Protocol on a Common Market to commence. The general sense of optimism was however soon overshadowed by seemingly endless disagreements.  As is to be expected, debate has arisen over the issue of free movement of people and the use of national identity cards for
purposes of cross-border travel within the region. A related debate is over access to land by non-nationals. At the other extreme, the author quite reasonably questions member states’ commitment to the Common Market, given the miserly rates of intra-East African
Community (EAC) trade.

We would like to innovate and improve our service delivery to your and others. Help us get started..
Submit your review